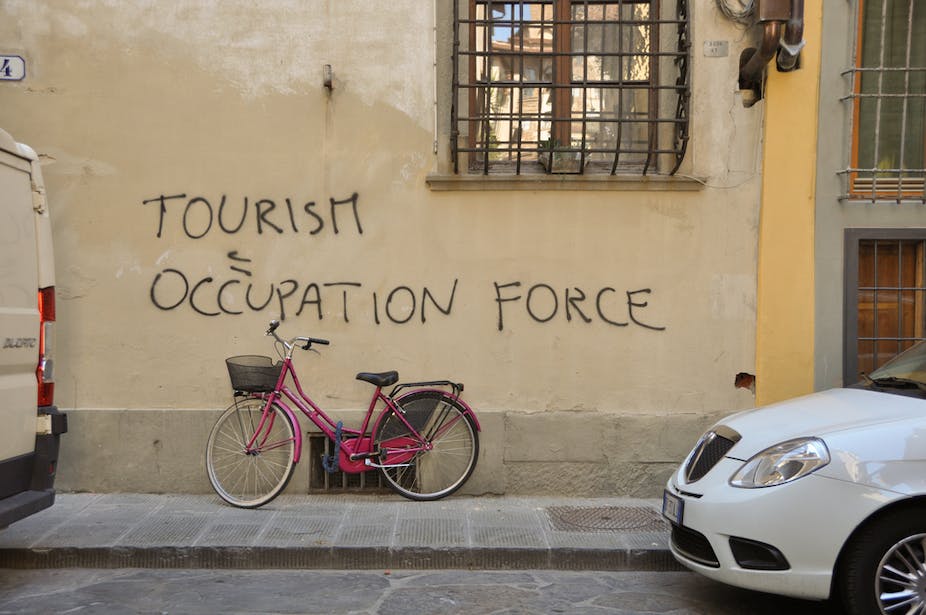 The summer holidays are in full swing – and protests against overtourism have begun (yet again) in a number of popular European cities. Overtourism is not a new problem.

Barcelona, in particular, is at the centre of these mounting concerns about the rapid growth of tourism in cities, especially during peak holiday periods. In fact, Destination Barcelona estimates that there were 30m overnight visitors in 2017, compared to a resident population of 1,625,137.

But across southern Europe protests and social movements are growing in number. This has led to the formation of organisations such as the Assembly of Neighborhoods for Sustainable Tourism (ABTS) and the Network of Southern European Cities against tourism (SET). They are at the forefront of the fight against overtourism and the impact it has on local residents.

While many tourists want to “live like a local” and have an authentic and immersive experience during their visit, the residents of many tourism-dependent destinations are seeing the unique sense of place that characterised their home towns vanish beneath a wave of souvenir shops, crowds, tour buses and rowdy bars. They are also suffering as local amenities and infrastructure are put under enormous strain.

It is a truly global issue. Other destinations where overtourism has reached disruptive proportions include Palma de Mallorca, Paris, Dubrovnik, Kyoto, Berlin, Bali and Reykjavik. Recently, Thai authorities were forced to act when the number of tourists visiting Maya Bay, the beach made famous by Danny Boyle’s film The Beach, led to shocking environmental damage.

We define overtourism “as the excessive growth of visitors leading to overcrowding in areas where residents suffer the consequences of temporary and seasonal tourism peaks, which have enforced permanent changes to their lifestyles, access to amenities and general well-being”. The claim is that overtourism is harming the landscape, damaging beaches, putting infrastructure under enormous strain, and pricing residents out of the property market. It is a hugely complex issue that is often oversimplified.

It can have an impact in multiple ways. The international cruise industry, for example, delivers thousands of passengers daily to destination ports. While comparatively little is returned to communities, cruise activity creates physical and visual pollution.

City residents also bear the cost of tourism growth. As cities transform to cater for tourists, the global travel supply chain prospers. This coincides with increasing property speculation and rising costs of living for local communities. AirBnB, for example, has been accused of reducing housing affordability and displacing residents. 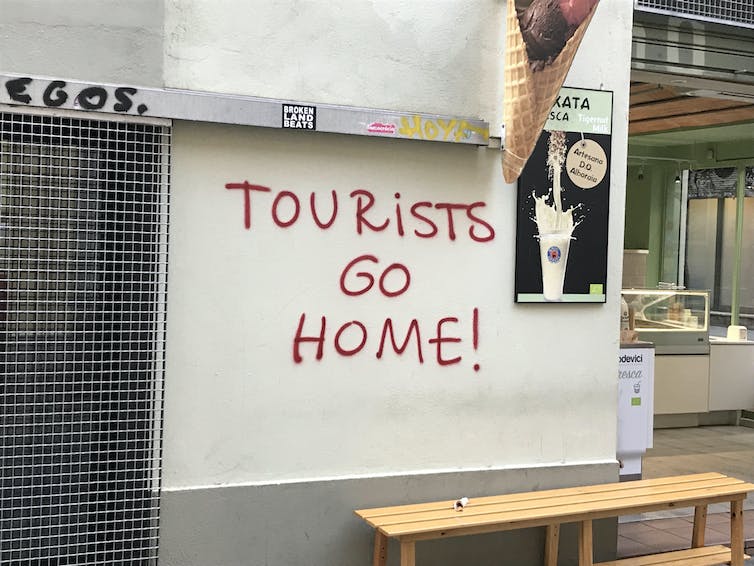 Amsterdam wants to take direct action to prevent this by banning short-term rentals and directing cruise passengers away from the city centre. AirBnB is also making efforts to address the problems they are accused of creating.

Things are made worse by the fact that key destinations are mostly unprepared to deal with overtourism. According to the Italian sociologist Marco d’Eramo, in 1950 just 15 destinations were visited by 98% of international tourists, while in 2007 this had decreased to 57%. This indicates the rapid expansion of global tourism beyond established destinations.

Overcrowding and the establishment of typical tourism-focused businesses, such as clubs, bars and souvenir shops, overwhelm local businesses – and rowdy and unmanageable tourist behaviour is common. This diminishes the unique ambience of destinations and leads to crowd and waste management pressures. 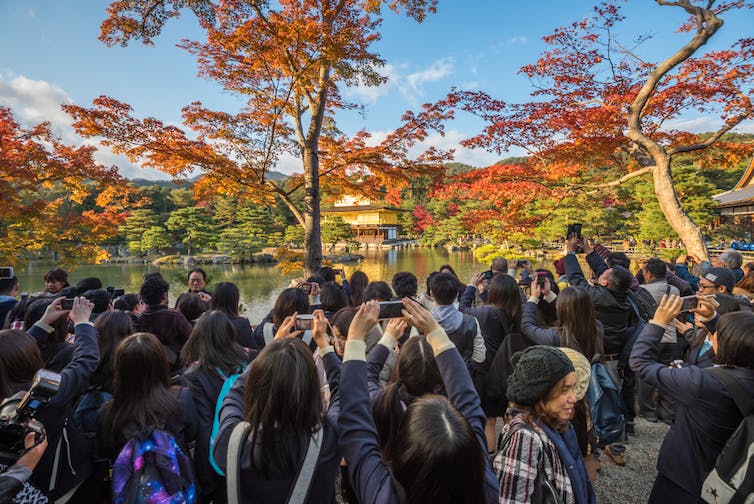 Clearly, tourism brings jobs, investment and economic benefits to destinations. But overtourism occurs when tourism expansion fails to acknowledge that there are limits. Local government and planning authorities have so far been powerless to deal with the overwhelming influence of the global tourism supply chain. This has led to widespread “tourist-phobia” – first described by Manuel Delgado more than a decade ago as a mixture of repudiation, mistrust and contempt for tourists.

Dealing with overtourism must now be a priority. But despite the mounting howls of protest, tourism promotion endures – and unsustainable hordes of tourists continue to descend on cities, beaches and other natural wonders.

Managing the flow of tourists seems an improbable and unwelcome task. But some cities have taken drastic measures to limit the effects of overtourism, including the introduction of new or revised taxation arrangements, fines linked to new local laws, and “demarketing”, whereby destinations focus on attracting fewer, high-spending and low impact tourists, rather than large groups.

But it’s a fine line to tread. If tourist arrivals to a destination decline suddenly and dramatically it would likely have considerable economic repercussions for those who rely on them. 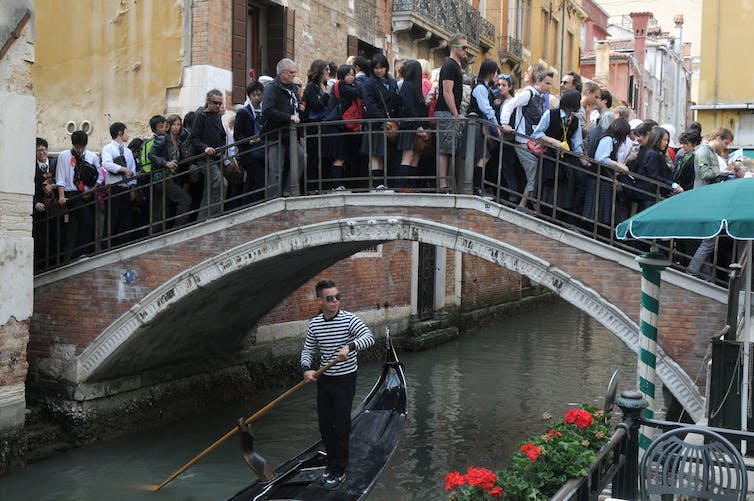 ‘I just want to get home.’ Shutterstock

Overtourism is a shared responsibility. City administrators and destination managers must acknowledge that there are definite limits to growth. Prioritising the welfare of local residents above the needs of the global tourism supply chain is vital. Prime consideration must be given to ensuring that the level of visitation fits within a destination’s capacity.

The global tourism supply chain also bears a major responsibility. It must ensure that product development achieves a balance between the optimal tourist experience and a commensurate local benefit. Tourists must also play their part by making travel choices that are sensitive to the places they visit and those who live in and around them.

Tourism should be part of the wider destination management system, which must also consider transport and mobility, the preservation of public spaces, the local economy and housing, among other aspects of daily life. Research, planning and a close and ongoing dialogue between city administrators, the tourism industry, civil society groups and local residents are essential.

Perhaps overtourism is a symptom of the present era of unprecedented affluence and hyper mobility, a consequence of late capitalism. We need to urgently rethink the way cities are evolving to uphold the rights of their residents.