Pudge Will Keep Us Together

They were headed for a painful breakup. Then a stray dog wandered in. 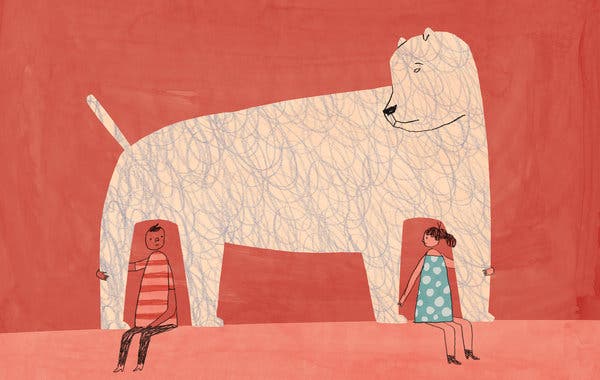 I had a dress pulled halfway over my head when my phone rang. Despite my insistence that I be left alone for a few hours on my day off, Jeff was calling me. I was trying on vintage dresses I couldn’t afford in a shop a few blocks from our house. When he asked me to come outside, I said, “How do you know where I am?”

As I pulled my clothes back on, grumbling, I tried to give my boyfriend the benefit of the doubt. Maybe he wanted to make a nice gesture, like buying me a cup of coffee.

Instead, I found him waiting on the sidewalk next to a knee-high, tan-colored dog. The dog trotted up to me, panting in the humidity, his jowly mouth smiling. I let out the involuntary sound I make whenever I see a new dog, something between an adult cooing at a baby and a child crying over a Christmas present.

He was stocky with fine fur and a square head like a pit bull. His small ears folded over into symmetrical triangles.

Jeff said he had seen Pudge from his car wandering about a mile away. Worried about the dog being lost in the heat, he followed him for a block. “Eventually, I got close enough to pull over and open my door,” he said. “And Pudge jumped in.”

“How did you know his name is Pudge?”

“I don’t,” Jeff said. “I named him that. I know you have plans, but do you think you could help me find his family?”

This was something I had always loved about Jeff: his knack for derailing my plans in the best way possible. I hadn’t indulged his spontaneity lately, and with Pudge wagging his tail at me, I couldn’t say no.

Jeff and I had been a couple for two years back then, and we’d been living together for a year and a half. When we first moved in to the three-bedroom house we shared with two friends, I wanted us to get a dog. This became a nightly topic of conversation, until it became an argument.

Jeff had logical reasons against us becoming pet parents: We were trying to save money, our jobs had odd hours, and we both wanted to leave Kansas City, Mo., soon.

In the weeks before we found Pudge, life had only gotten more complicated. Jeff’s sister had learned, at 33, that she had brain cancer, and he decided he would return home to Minnesota to care for her. Around then, I decided I would attend graduate school in Spokane, Wash.

We had one month left on our lease. Neither of us wanted to break up, but we knew it was right given the circumstances. With the same sad optimism, we agreed we would remain friends.

Since Pudge didn’t have tags or a microchip, we walked the neighborhood where Jeff found him for three hours. We crisscrossed streets, Pudge plodding along as we knocked on doors and asked passers-by if they recognized him.

After two days of long walks and numerous social media posts, we were no closer to finding Pudge’s owners. The day before, we had a vet check him over and learned he had a serious ear infection.

When we squirted the medication into his ears, he squeezed his eyes shut but didn’t pull away or snap. He never even barked, only whined softly if Jeff or I left the room and wagged when we returned.

We couldn’t believe that such a well-mannered dog didn’t have a real home. But despite Pudge’s good behavior, our roommates were, understandably, ready for the furry interloper to leave.

The no-kill shelter we looked into in Kansas City had a policy that strays kept longer than 72 hours required a surrendering fee. Our other option was to call animal control, which would take him to the same shelter for free.

On the third day, Jeff made the call, and the officer showed up within an hour. Pudge pushed his way out the screen door and greeted the officer the way he greeted everyone, as if she were a long-lost friend.

“Can we say goodbye?” I said. I tried to hold myself together, but as I crouched down to pet Pudge, I started sobbing. So did Jeff.

The officer looked at us like we were crazy. “I don’t have to take him, you know. He can stay here.”

As the officer led Pudge away, Jeff and I hugged each other.

“No,” I said. But we both cried even harder.

About two hours later, when Jeff left to buy beer so we could drown our sorrows, I received a message on Facebook from a woman who recognized Pudge from one of my posts. She said his name was Buddy and gave me the name of the owners. I messaged them to say Buddy was waiting at the shelter.

“That’s probably for the best,” the man wrote. “We already have three dogs. We were thinking about giving him away anyway.”

By the time Jeff returned, I needed something stronger than alcohol.

Knowing that Pudge’s owners didn’t want him back changed everything. We were still broke. Our relationship was still on the verge of ending. And it was true that if we were to leave Pudge at the shelter, he might find another home. Yet we couldn’t let him go.

We had two weeks left on our lease, but we had not talked about breaking up. We only talked about getting that damn dog back.

So we made a plan. Since I had farther to move and a busier schedule as a student, we decided Jeff would be the one to take Pudge. We begged our roommates to put up with Pudge a little bit longer, and for Jeff’s father to let a dog move into his house at the end of August, along with his adult son.

Our friends and loved ones met these requests with more grace than we probably deserved. Perhaps they guessed, correctly, that Jeff and I were both about to fall apart.

We brought Pudge home in mid-August and had a normal life together for one week. We took him on walks, bathed him in the backyard with the hose, scolded him for begging for food. Pudge would spread out on the kitchen floor anytime I cooked dinner. He took approximately 10 naps per day yet slept soundlessly through the night.

Days before our move-out date, I looked around at our suitcases and half-packed boxes, and at Pudge napping in his bed.

“You know,” I said to Jeff, “it bothers me that we never really talked about long distance as an option.”

Before, I had tried to slowly disengage from Jeff to lessen the looming heartbreak. But having a dog connected us. Rather than going out separately, Jeff and I took Pudge to the park or to brunch. We debated brands of dog food instead of fixating on the end of our relationship.

Most important, neither of us ever could have afforded to adopt a dog alone. Splitting the cost of vet bills, adoption fees and supplies was our saving grace; it revived the generosity we’d once shown each other.

That night, Jeff and I weighed the pros and cons of staying together long distance, then took a break. We talked about it again the next day, then changed the subject. Took Pudge for a walk, talked about it some more. Talked about it in bed, with Pudge sleeping on the floor.

Despite the distance between us, the daunting costs of airfare and the uncertainty about our futures, we couldn’t let each other go any more than we could let go of this dog.

One year later, Jeff and I are still together, though living hundreds of miles apart. I wish I could say Pudge was still with us too. But in early December of last year, four months after I had moved away, our vet discovered that Pudge had cancer throughout his body. The day after New Year’s, we had to put him down.

Pudge isn’t the only reason Jeff and I didn’t break up, but he played a crucial role, uniting us when we needed it most. By giving an old dog a new home for what turned out to be his final months, we gave our love a new place to live too.

Maura Lammers is a graduate student at Eastern Washington University.

A version of this article appears in print on Sept. 23, 2018, on Page ST6 of the New York edition with the headline: Pudge Will Keep Us Together

Look at it in The New York Times, here.