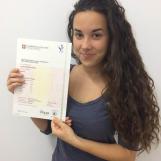 LAURA I’ve just got my FCE certificate! Finally, all my effort has paid off. After studying for years and years, last 9th of July I took my first ever official exam and it went surprisingly well. At first we were all nervous, but after finishing the “Grammar and use of English” part, it all went smooth and nice. From my point of view, the exam that we took that day, was easier than the ones that we were doing at class with Irene, and the examiner from the speaking part, was very nice in comparison of what we expected. The atmosphere there was very professional, and at the end of the day we all felt like we had passed the exam, and we were right! It’s very important to have a certificate which proves that you have a good level of the language, and it’s also helpful when finding a job. Huge thanks to Isa and Irene for making me love English and also for helping me throughout my journey. TIP: Don’t be afraid of taking official exams, just be sure you are ready enough and you’ll get through it easily.

LIDIA The 9th of July I took the First Certificate Exam. I was really nervous. The night before I dreamt about a lot of different situations of me missing the exam and failing it. But when I woke up, I realized that there was nothing to worry about because I was well prepared. The first part we did was the “Reading and Use of English”. After finishing that part, I was more relaxed. I had the feeling that was easier than the ones we had been doing during all the year to get prepared. We had to work really hard, but once you’ve got the certificate, all the effort is rewarded.

CARLOS Recently, I took the First Certificate of English Exam. I remember the day as it would’ve just happened. I went to L’Hospitalet and nervously tried to find the office where we would do the exam. I met my classmates there and we got into the examroom. It was all very scary at the moment, but when you’re all over it, you can’t remember what you were afraid of. I ended up with a Grade A, being just 13 years old. It was easier than we thought, however it still was no joke. 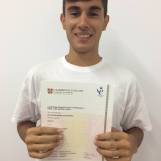 VÍCTOR The day that Isa and Irene told me that I was prepared to take my FCE exam and that I was going to take it in 2 months I was really nervous and a little bit anxious. We started preparing the exam at the academy on Monday’s class. Time passed really fast and the day of the exam arrived. You don’t know how important it is having the FCE level until you are at the exam room with other 50 people waiting to begin. We could hear each other breathing and the room was in complete silence. Fortunately, when I started the exam all doubts and nerves disappeared and I could take the exam more or less well. Although I haven’t got the results I expected, at the end of the day I was sure that I would have passed it, so about three weeks after the exam I was told that I had achieved my objective!!!